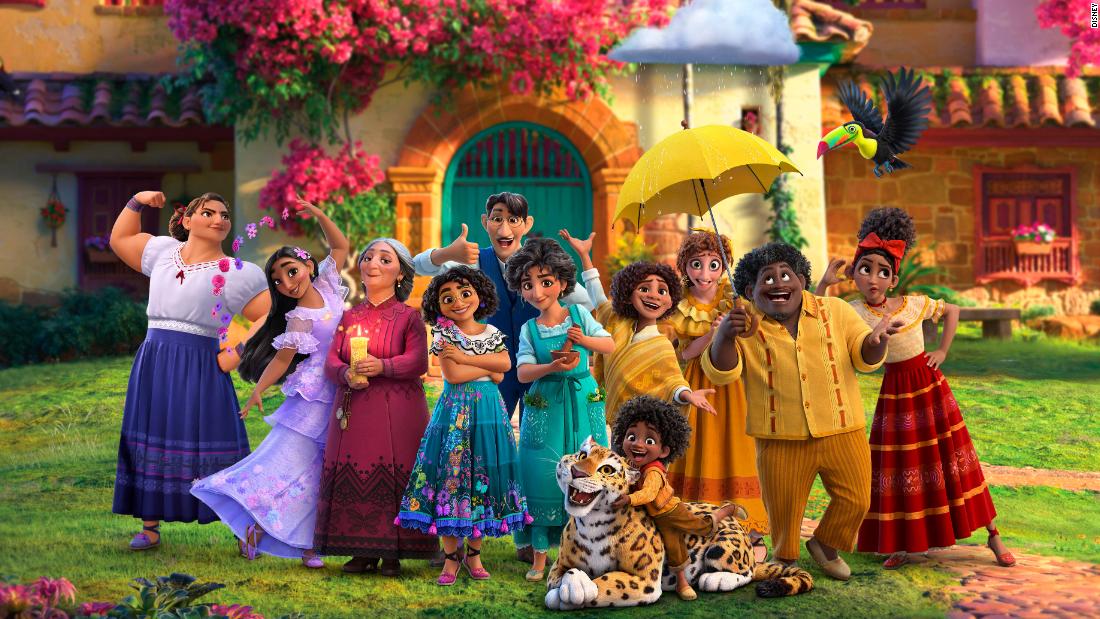 She knew characters from a multiracial Afro-Latino family would be an important addition to her office in Kennesaw, Georgia, where she holds play therapy sessions and makes a point of finding toys that reflect the diversity of her young patients’ lives.

When she finally watched the movie on Disney+, Adelakun realized the figurines were an even better fit than she’d imagined. The plot of “Encanto,” she says, perfectly captures issues many families are going through.

“There are so many layers, so many dynamics,” Adelakun says.

Therapists who spoke with CNN say they’re talking about the movie with their clients — many of whom are first-generation children of immigrants who see themselves reflected in the story, hear their experiences in the soundtrack, and are using “Encanto” to speak out about things that otherwise might go unsaid.

“I think it’s going to have a great impact on society. … People are seeing this movie and they’re realizing they’re seeing themselves in it,” Adelakun says.

Here’s a look at several key “Encanto” characters and the conversations they’re sparking:

The healer trying to keep her family whole

The song that stands out: “Waiting On a Miracle”

At the beginning of “Encanto,” Mirabel introduces us to the Madrigal family, gleefully describing each person’s “gift,” or magical power. We later learn that the magic and the family’s enchanted house have a darker side, originating in a traumatic moment after the family was forced to flee their home, trudge through the wilderness and cross a river seeking safety.

Mirabel is the only member of the Madrigal family who doesn’t get a gift. But in the end, her power is in seeing her family members for who they are and doing all she can to keep them together.

“Mirabel was really the glue to the family, but no one was really seeing it,” Adelakun says.

And it’s no coincidence that her character is someone many can identify with, says Mara Sammartino, a therapist in Fairfield, California.

“Our parents come here fleeing war, poverty, violence. They come here, they establish a life, and then we’re born into this duality, and we’re not seen in one, and we’re not seen in the other. I think that’s why Mirabel’s character resonates,” says Sammartino, whose parents came to the United States from Nicaragua. “She is part of that duality. She’s the only one that’s in touch with the community. … She’s the only one that’s (leaving the house) and going out, talking to people. Then she comes back home and she’s kind of put in her place and told, ‘you actually don’t have anything to contribute.'”

Jenny Lemus, a psychotherapist in Chicago, says she heard feelings many of her clients have expressed for years in Mirabel’s song, “Waiting on a Miracle.”

“She’s trying to communicate with her grandmother — ‘Look, this is what I’m experiencing. I want to be seen.’ A lot of times, the younger generations, what I’ve seen over the years, they want to be seen (by their families), they want the acknowledgment at least, and they’re not getting it,” Lemus says.

The perfectionist who feels she can’t fail

The song that stands out: “What Else Can I Do?”

At first glance, Isabela looks like she has it all; she can make flowers out of thin air and tosses her long hair like she doesn’t have a care in the world. But her song reveals how limiting perfectionism can be.

Adelakun, whose parents came to the US from Trinidad and Tobago, says the message is relatable for many immigrants’ children — including her.

First-generation children constantly “get the message that we need to be more,” says Lemus, whose parents immigrated to the United States from Guatemala. And those pressures, she says, can take a major toll.

“There’s a lot of anger. Sometimes we don’t know where the anger comes from. Why do I feel so angry with my parents or grandparents? What’s going on?… You see that a lot with first-generation Latinos, a lot of resentment building up because of that pressure that is unspoken within the family dynamic,” Lemus says.

“‘Encanto’ had such a beautiful way of portraying that in subtle ways. … Those of us that saw the movie and related to it, we got the message. We related so much to it. And I think that’s why it’s been such a hit.”

The sibling carrying the weight of her family on her shoulders

The song that stands out: “Surface Pressure”

Big-muscled Luisa is used to carrying anything her family needs her to handle. And her song confessing that she’s about to crack under the weight of it all is resonating with many people.

“It describes what anxiety feels like perfectly,” says Lemus, whose patients are predominately first-generation Latinos.

“A lot of clients relate to Luisa, who is experiencing the pressure of … carrying the burden for their younger siblings … having that pressure (of) protecting the younger siblings from their own experiences. It is eye-opening, and I’m so glad that I have clients that are very insightful and can relate to it.”

Seeing Luisa’s struggle depicted on screen can help those who are dealing with similar difficulties better understand and describe their own situation, Sammartino says.

“I think ‘Encanto’ gives a little bit of space for some clients. They can say, ‘Oh, well, look at Luisa.’ They’re not going to say, ‘Well, that’s me.’ They say, ‘Luisa experiences that. I feel for Luisa.'”

The family secret that goes unspoken

The song that stands out: “We Don’t Talk About Bruno”

When it comes to Bruno, who’s ostracized by his family and ends up hiding in the walls of the Madrigal house so he can be nearby but not have to face them, there’s plenty to talk about.

Bruno’s gift is seeing the future, and his family members blame him when the prophecies come true. Some of his mannerisms have sparked speculation about other possible diagnoses for the character, who’s the focus of the movie’s most popular song.

“He thinks differently. He sees things differently,” Adelakun says. “We have family members who are also neurodivergent or have mental health issues, and because they’re different, they get shunned, or they’re not spoken about.”

Family secrets like the stories that come out when Bruno is discussed in the film are a common sign of the intergenerational trauma many first-generation families deal with, Lemus says.

“But also, she says, “without the expectation that it’s going to be taken the way we expect it to be. Because…we don’t know how our parents or grandparents are going to take those hard conversations. … Generation from generation, if you didn’t learn how to express your emotions, you’re not going to know how to communicate in a healthy way.”

The matriarch who passes down her trauma

The song that stands out: “Dos Oruguitas” (played in the background during a flashback showing the traumatic origins of the Madrigal family’s powers)

What therapists are hearing: Protecting her family and their enchanted home is Abuela’s top priority. She’s obsessed with maintaining their magical powers and fails to realize how her experiences as a young mother — fleeing her home and losing her husband — have shaped her and her family. It’s only when the house crumbles and she almost loses everything that she sees her role in fracturing the family.

For Sammartino, it’s a perfect example to point to when she’s trying to help her clients empathize with their elders.

“My way of trying to support my clients is to really develop a lens of empathy for their parents and the trauma that they experienced,” Sammartino says. “Like Abuela in the movie, her husband was murdered in front of her. Why wouldn’t she be overprotective?”

It’s a classic illustration of intergenerational trauma, Adelakun says — and something that’s likely to increasingly resonate as the film gets a wider audience.

In the movie, Abuela apologizes once she realizes the harm she’s caused.

But Lemus cautions there’s one thing that’s important to remember.

In real life, she says, Disney endings are rare.

Sometimes, families become estranged rather than coming together with a shared understanding. It’s a sad outcome, Lemus says, but doesn’t stop individuals from coming to terms with trauma and giving a healthy start to future generations.

Even without a Disney ending, she says, it’s possible to heal.