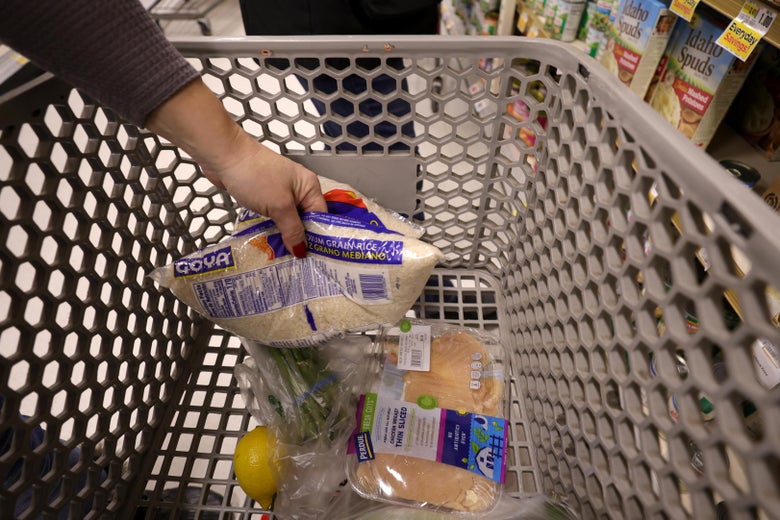 It’s starting to feel like the beginning of the pandemic again, in more ways than one. The insanely infectious omicron variant is renewing old debates about school closures. Lines for tests are stretching for blocks. The Utah Jazz’s Rudy Gobert, the NBA’s first public COVID-19 case in 2020, just tested positive last week. And, yet again, supermarket shelves in a lot of places are looking increasingly barren.

Grocery stores and food supply chains have been stretching themselves throughout the pandemic to keep products in stock, but the onset of omicron is now upending operations across the board. In the grocery stores themselves, outbreaks among staff are exacerbating already-existing labor shortages stemming from the Great Resignation. Bloomberg reports that cases have tripled among the staff of SpartanNash, a major grocery chain and supplier in the Midwest, over the last few weeks, with about 1 percent of its 18,000 employees testing positive. The company has still been able to fulfill orders, though there have been delays, even with lots of employees working overtime. Beyond directly infecting the workforce, the omicron variant has had some secondhand impacts on the industry’s labor. Many parents who work in grocery stores are staying home due to widespread school and day care closures, and other employees have decided their jobs just aren’t worth the risk of exposure during this surge.

Grocers have struggled to get their hands on certain items due to similar staffing shortages up the various food supply chains they rely on, forcing them to seek out different brands or to simply leave the shelves empty. For example, Reuters reports that there’s been a spate of infections among inspectors at meat plants, who according to federal law must approve meat products before they are sold commercially. The U.S. Department of Agriculture has been trying to send inspectors to staff shortage hot spots, such as Wisconsin, in response. The United Food and Commercial Workers International Union has further noted an uptick of infections among meatpacking workers, particularly at plants that have not urged their staffs to get booster shots. And slaughterhouses have been operating at lower capacity due to short-handed crews; on Friday, the number of cattle slaughtered was down 6 percent and the number of pigs slaughtered down 5 percent compared with last year, according to the USDA. Altogether, these supply chain hiccups, inflation, and booming demand may lead to further increases in meat prices.

A similar story is also playing out in other food sectors, just with different types of workers and products. In a Thursday earnings call for Conagra, a major supermarket supplier that sells products like Reddi-wip and Orville Redenbacher’s, CEO Sean Connolly predicted that omicron-induced labor outages could strain supply chains for “the next month or so.” (Sorry, popcorn lovers.) Winter storms also appear to be contributing to the problem, with road conditions making it difficult for drivers to make deliveries and consumers hoarding in case they get snowed in.

The Biden administration is currently enacting a number of measures in an attempt to address the bottlenecks that have resulted from omicron and to make food supply chains more resilient against these kinds of shocks in the future. Last week, the administration announced it was dedicating $1 billion in American Rescue Plan funds to expand and diversify meat processing capabilities, with the goal of ensuring that the U.S. isn’t so reliant on a small number of major plants that have an outsize impact on supply chains when they face staffing shortages. However, many of the initiatives won’t begin until the spring or summer. The White House supply chain task force, which was formed over the summer, is also trying to fix the various snags that have been stymieing the transportation of food and other goods. During a press briefing on Wednesday, the task force’s port envoy John Porcari detailed efforts to unclog the country’s ports, such as imposing fees on long-dwelling empty containers and striking deals with major retailers to move cargo during off-peak hours. He further noted that the task force is monitoring an increase in outages among longshore workers due to omicron, but claimed that these outbreaks have not interfered with operations thus far.

Despite these efforts, many grocery stores do seem to be visibly short on product for the time being, which has led prominent conservatives to use the hashtag #BareShelvesBiden, though researchers have alleged that the social media trend was not organic, but instead possibly the result of third-party tools that artificially inflate reach.

#BareShelvesBiden is the next big trend

The U.S. isn’t the only country dealing with depleted grocery stores, however, as Australia is facing what may be an even more dire situation. Woolworths Group, Australia’s largest supermarket chain, announced on Thursday that more than 20 percent of its workers in distribution centers and at least 10 percent of its workers in its stores are out due to COVID-19 infections. The country’s second-largest operator, Coles Group, had to instate a two-pack limit for sales of mince, sausages, and chicken breasts and thighs this week. The governments of New South Wales and Queensland decided to relax their isolation policies for food workers on Sunday in a bid to alleviate the ongoing shortages.