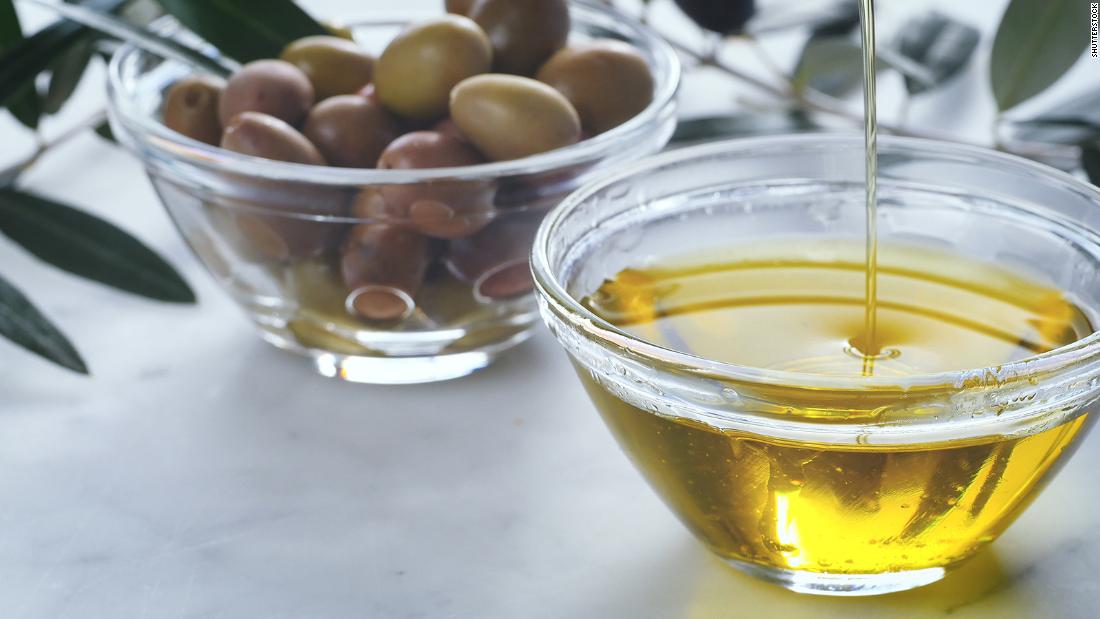 “The takeaway is to use olive oil every time you can as a substitute for saturated fats when you’re cooking or in your salad dressings,” said LeWine, who was not involved in the study.

Men and women who replaced just over 2 teaspoons (10 grams) of margarine, butter, mayonnaise or dairy fat with the same amount of olive oil had up to a 34% lower overall risk of dying than people who ate little to no olive oil, according to study author Marta Guasch-Ferre, a senior research scientist at the Harvard T.H. Chan School of Public Health.

“This is the first long-term study, including more than 90,000 participants followed for up to 30 years, conducted in the American population on olive oil and mortality. Previous studies were conducted in Mediterranean and European populations where the consumption of olive oil tends to be higher,” Guasch-Ferre said via email.

“Our results provide further support for recommendations to replace saturated fat and animal fat with unsaturated plant oils, such as olive oil, for the prevention of premature death,” she added.

Both the study and editorial were published Monday in the Journal of the American College of Cardiology.

The connection between olive oil and fewer deaths from brain disease was “novel,” Larsson wrote. “Considering the lack of preventive strategies for Alzheimer’s disease and the high morbidity and mortality related to this disease, this finding, if confirmed, is of great public health importance.”

Beloved in the Mediterranean

Olive oil, or “laderá” in Greek, is a key staple in the award-winning Mediterranean diet, which studies have shown can reduce the risk for diabetes, high cholesterol, dementia, memory loss, depression and breast cancer. The diet, which is more of an eating style than a restricted diet, has also been linked to stronger bones, a healthier heart and longer life.
While the Mediterranean way of eating is based on traditional foods from the 21 countries that surround the Mediterranean Sea, it revolves around a fundamental theme. The focus is on simple, plant-based cooking, featuring fresh vegetables and fruits, whole grains, beans, seeds and nuts, and a heavy emphasis on extra virgin olive oil.

In Greece, the birthplace of the Mediterranean diet, olive oil is such a part of Greek life that if natives think someone is a bit crazy, they say they are “choris ládi” or “losing oil.”

But food is not the only focus of the Mediterranean approach, which recently topped the 2022 rankings for best diet for the fifth year in a row. It’s actually a lifestyle which also emphasizes movement — walking, biking, gardening — as well as mindful eating and the social benefits of dining with friends and family.

An emphasis on healthy behaviors was also found among the men and women who ate the most olive oil in the study, Guasch-Ferre said. They were more likely to be physically active or eat more fruits and vegetables than those who ate less olive oil. They were also less likely to smoke.

“It is true that sometimes it may be difficult to disentangle the ‘real’ effect of olive oil versus having other healthy behaviors,” Guasch-Ferre said, adding that more studies of Americans from all backgrounds were needed to see if the results are similar.

However, the study did adjust for a number of potential confounding factors, “including dietary factors, lifestyle factors, history of diseases as well as socioeconomic status factors and the associations were significant, even after adjusting for BMI (body mass index),” she said.

The important finding from the study, Guasch-Ferre said, is the benefit of replacing unhealthier fats such as butter and full-fat dairy and mayonnaise “by increasing olive oil for cooking, dressing and baking, similar to other Mediterranean populations.”

“Of note, no scientific evidence supports the notion that eating more olive oil is associated with weight gain,” she added. “Olive oil could probably increase satiety and fullness, which may potentially reduce the consumption of unhealthy snacks.”