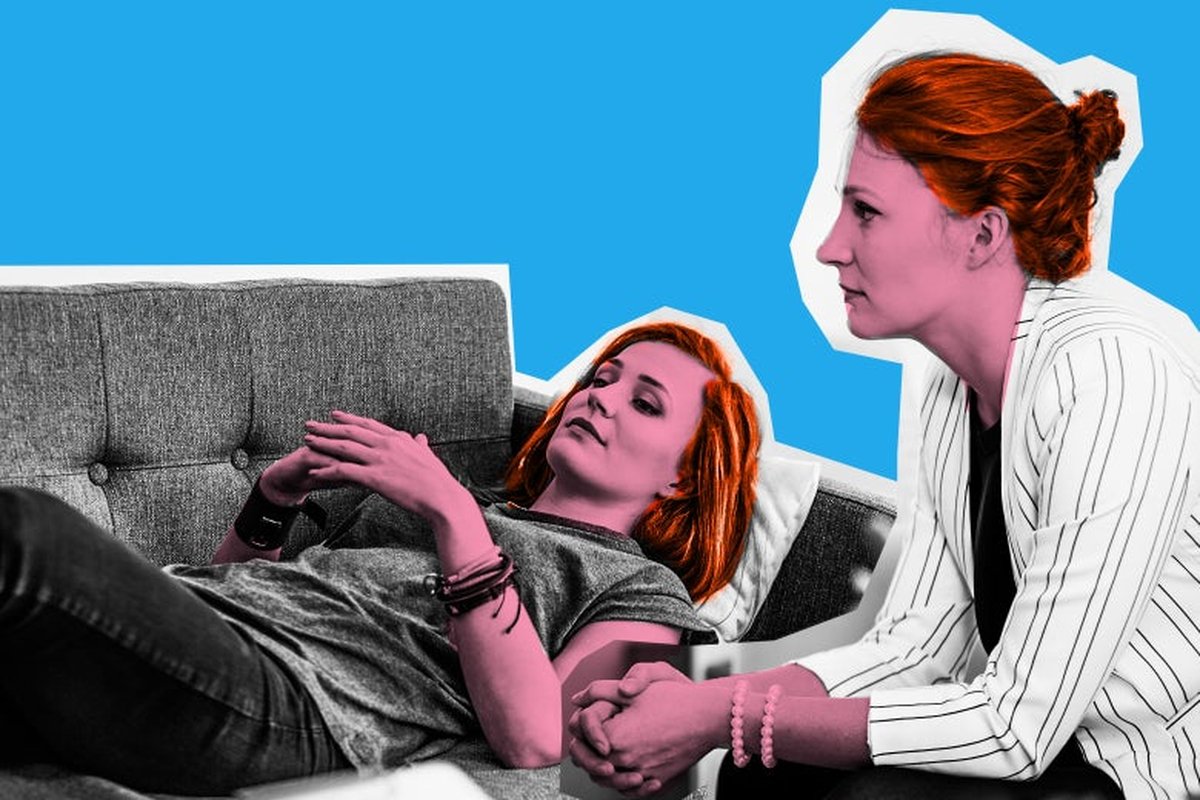 Photo illustration by Slate. Photos by KatarzynaBialasiewicz/iStock/Getty Images Plus.

There are many simplistic but entertaining binaries by which to classify the types of people in the world, but one I find to be instructive is whether you believe in therapy. On the one hand, there are people like me, who exist in a somewhat constant state of telling people that they ought to at least consider seeing someone professionally. (I’ve personally found it so worthwhile that I don’t even think my friends need to have “real” problems to try it.) On the other hand are people like my mother, who just last week asked me, “Are you still seeing your … person? Aren’t you healed by now?” This may (doubly) explain why I am such a susceptible audience for Lori Gottlieb’s 2019 book, Maybe You Should Talk to Someone. The subtitle—A Therapist, Her Therapist, and Our Lives Revealed—makes clear that this book will attempt to invert our normal perception of therapists by putting its subject on the couch.

Gottlieb became a therapist relatively late in the game. As she chronicles in the more memoir-y sections of the book, she had several previous careers, including a false start in medical school and a long period as a journalist, before she decided to go back to school to become a clinical psychologist. Today, she combines journalism and therapy, most notably in her “Dear Therapist” advice column for the Atlantic, which itself somewhat makes the argument for therapy based on the fact that the questions are often far too complicated ever to be answered in the span of one response, though Gottlieb does her best. Maybe You Should Talk to Someone counters this particular issue by following a small handful of Gottlieb’s patients’ therapeutic journeys alongside her own journey as a therapist and as a patient.

There’s something satisfyingly voyeuristic and intimate about getting to listen in on anyone else’s therapy, a feeling Gottlieb amplifies by contextualizing what is actually happening in each session from a more clinical perspective. She does this by gently and constantly explaining to the reader what exactly therapists are trying to do with their patients, sharing language and frameworks. (The “presenting problem,” for example, is often what gets people in the door, but is usually just a symptom of whatever else might need to be addressed.) And she frequently reveals the times during sessions when she found herself lost—as patient and as therapist. Therapy can be an opaque process cordoned off from the rest of the world, through lack of access and continued stigma, so the explanation-oriented material that’s a bit obvious or even borderline self-help-y is more than made up for by the relief that comes with just seeing someone talk about this stuff out loud.

Some of the patients Gottlieb follows are sympathetic, like a newlywed struggling with a serious cancer diagnosis. Others are tougher to like: an older woman grappling with the fact that she didn’t leave her abusive husband before he beat their children, or a television executive who seems to hate everyone and is lying to his wife about being in therapy. (In an author’s note, Gottlieb clarifies that the portraits of their lives have been anonymized and are occasionally representations of multiple patients at once.) It is this exact question of likability that fascinatingly presents itself throughout the book, a meditation on the fact that we all consider ourselves to be the protagonists of our own stories, despite our flaws, a fact that must be abundantly apparent to our therapists. Early on, Gottlieb, struggling to remain patient with the television executive, reminds herself that “there’s something likeable in everyone,” a very therapist thing to say. But as we delve further into the process, she starts to unpack this idea of likability in greater depth, particularly in how it relates to herself—to her own self-perception as a patient and a person in the world. In doing so, Gottlieb simultaneously argues that likability matters much less than any of us think—“In therapy we aim for self-compassion (Am I human?) versus self-esteem (a judgement: Am I good or bad?)”—and acknowledges that we still all want to be liked just the same. Even Gottlieb asks her therapist, sheepishly, if he likes her. This smaller stuff may be clinically irrelevant, but it still matters.

Gottlieb’s “presenting problem” was the fact that her boyfriend broke up with her abruptly, right before they were supposed to marry, but as she delves deeper into her therapy, she uncovers the bigger problems, including her stress over a book on happiness that she is supposed to write and just can’t make herself do. Gottlieb’s anxiety over the book is even more revealing as it becomes clear that the book you are reading now is what she wrote instead of the happiness book. In a way, Gottlieb is turning her “Do you like me?” question to her readers, all the while performing a sort of gymnastics of acknowledging that it is her ability to like herself that matters much more. The intimate secret is that the latter is often more related to the former than any of us, even our therapists, like to admit.

Despite the book’s title, I get the feeling that Gottlieb lands more in between me and my mother than you might think—she herself is initially slightly resistant to going to therapy, and spends a bunch of time explaining that she just needs a tool set for getting over the pain of her breakup and nothing more. Therapy as a method to deploy only when someone is broken in some way and needs to be fixed is a familiar refrain to those of us who think basically everyone would benefit from therapy. It’s strange to see Gottlieb, a therapist herself, seemingly imply that someone can be too “together” to benefit from talking to someone. And yet, I’m glad she grapples with this. Watching her come to the realization that the process has things to offer her beyond a quick solution is a lesson in and of itself. And her admission that she was not as fine as she thought places her in a position of vulnerability—and allows us to witness her getting on the right track.

Gottlieb couldn’t write the happiness book. And in Maybe You Should Talk to Someone, neither Gottlieb’s patients nor their therapist end up uncomplicatedly happier by the end. But they are more aware—of themselves as people, of the choices they’ve made, and of the choices they could go on to make. Which is, I think, a useful way of thinking of the answer to my mother’s question. The point of therapy is not “healing.” It’s exploration—genuinely wanting to learn answers to the question Why am I like this?, so that maybe, through better understanding of what you’re doing, you figure out how to be who you want to become.